Since the golden days of the PlayStation 2, I have been obsessed with the Ratchet and Clank games.

Every Christmas in the early 2000s, a new Ratchet game would rattle into stores, and come Christmas morn I would find it neatly wrapped up under the Christmas tree. Thanks, mum and dad.

Fast forward 20 years or so, and we’ve now been graced with the Ratchet and Clank: Rift Apart, a Ray-traced totting, gun-slinging platformer staring our loveable Lombax and courageous Clank.

Being such a fan, I bought the game day-one and played through it without stop until completion.

But then I was presented with what has become a staple in the Ratchet and Clank gaming universe: Challenge Mode.

Ratchet and Clank: Rift Apart Challenge Mode is essentially the equivalent of New Game Plus in other games. In this mode, there are more enemies and they have more health. You’ll also get the opportunity to buy powerful Omega versions of weapons and upgrade them. You’ll also have a bolt multiplier to help you buy expensive Omega weapons.

Ok, that’s a lot I’ve got to get through. Let’s get started…

What is Ratchet and Clank: Rift Apart Challenge Mode?

Challenge Mode in Ratchet and Clank rift apart is essentially what New Game Plus is in other games.

In Challenge Mode, you’ll start the story again with all the levels locked as they would be at the start of a normal new game.

However, a few things will spice up your new Challenge Mode play-through…

In Challenge Mode, the bad guys will be more numerous and harder to kill. They’ll attack quicker and fire more bullets that travel faster. Enemies will also have more health.

You’ll retain all of your unlocks such as Gold Bolts and Holocards. You can continue to collect them in Challenge Mode.

In Challenge Mode, you’ll carry over all the weapons and any upgrades you’ve already bought in your previous playthrough. You can also continue to upgrade them.

However, instead of using your normal weapons, you’ll be given the opportunity to buy Omega Variants of all the weapons in the game. More on these later.

Also, sadly, you will not have the frankly awesome RYNO to start with. Fortunately,  you’ll be given the chance to acquire it later in the game as normal. And you can upgrade it.

Any Bolts or Raritanium you have collected on your first play-through will carry over to your Challenge Mode playthrough. And believe me, you’re gonna need a lot of them both to buy and upgrade those Omega Weapons.

You’ll need a lot of bolts if you want to buy all the Omega weapons on your Challenge Mode playthrough. Fortunately, you’ll have a bolt multiplier to help you out that increases the number of bolts you pick up on your travels. More on the bolt multiplier later.

Any armor that you discovered on your first playthrough will carry over into your Challange Mode playthrough. So you can make use of that +20% bolts armor you found!

Ratchet’s upgraded health level will carry over to the new game and can be continually upgraded. And with so many high-level enemies roaming around the game world, you’ll want to be upgrading your health level as much as you can.

How do you play Challenge Mode Ratchet and Clank? 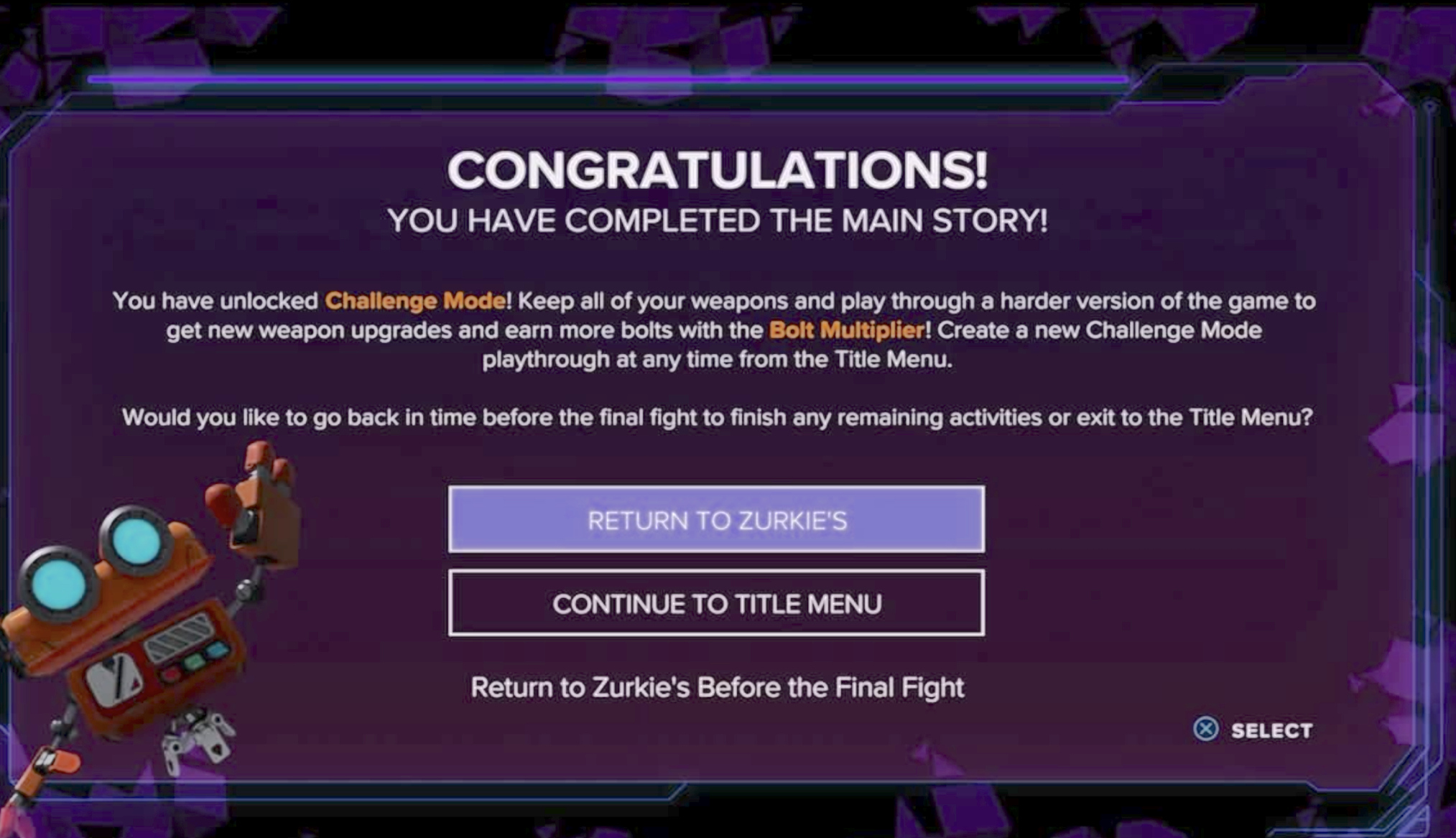 You can only access Challenge Mode once you have completed the main Ratchet and Clank: Rift Apart story on any difficulty.

On completing the main story in Rift Apart, you are presented with two options. You can either go back to Zurkie’s Bar before the final fight, or you can go to the game’s Title Menu.

If you choose to go back to Zurkie’s bar, you will not activate Challenge Mode. Instead, you will simply continue on in your current save before the final boss fight.

After you click square, Challenge Mode will be activated and the main story will start over.

Is Challenge Mode worth it Ratchet and Clank?

If you’re a fan of Ratchet and Clank or you just love to level up weapons over-the-top in-game weapons, then activating and playing through Challenge Mode is an absolute must.

I rushed through my first playthrough as quickly as possible so I could start Challenge Mode because, for me, that’s where the real Ratchet and Clank game begins.

The game is harder. But there’s nothing like upgrading all the amazing weapons to their maximum level, just to see the effects and destruction they can create.

Plus, the Bolt multiplier, which I will explain shortly, adds an extra layer of strategy to the game.

In my personal opinion, I’d say playing through Challenge Mode is essential.

Sadly no, there isn’t.

On completing Challenge Mode and starting again, you keep all your weapons, including Omega weapons (except the RYNO) and you’ll play through the game again. That’s it. there’s no Challenge Mode Plus Plus waiting for you.

Your only option is to head straight back into the game, keep on farming bolts, keep improving your weapons, and keep getting collectibles and trophies.

Though that should keep you busy for a long time.

Do gold bolts and other collectibles carry over in Ratchet and Clank Challenge Mode?

All the collectibles, including Gold Bolts, Holocards, and Armors carry over to your Challenge Mode playthrough.

Additionally, you can continue collecting all of the collectibles you missed on your first playthrough.

What weapons are available in Ratchet and Clank: Rift Apart Challenge Mode?

The weapons that are available for you to use in Challenge Mode are nearly exactly the same as in normal mode with two exceptions. If you own any of the guns on this list in your first play though, you will have access to them immediately in your Challenge Mode play though. If you have not bought all of the guns on your first playthrough, you’ll have the option to buy all the guns you missed out on at the first weapon vendor you find.

All of the weapons have a Challenge Mode Omega Variant that you can buy. However, these Vareints cost a lot of bolts to buy, and huge amounts of Raritanium to upgrade.

The weapons available are:

You’ll notice the RYNO isn’t on this list. That’s because you’ll have to get it later in the game the same way you did in your first playthrough. You can then upgrade it as normal.

You can unlock these weapons in Challenge Mode by playing through the opening stages and then, when you get your first chance, talking to the Zurkon Weapons dealers. Before you get to Coson V you’ll get the option to buy both weapons for the poultry sum of 1 bolt each. That’s one heck of a deal!

While on your travels through Ratchet and Clank, you can level up each weapon 5 times and buy a plethora of upgrades for all of them by using Raritanium.

Though they are expensive, I can promise you that the Omega Varients are worth every extra bolt you’ll throw at them.

For starters, these extra Omega variants increase the level cap of each weapon from 5 to 10. These 5 extra levels give each Omega variant a far more elaborate upgrade tree that’s packed full of powerful upgrades.

However, there’s a sizable problem standing in between you and these Omega weapons: Mega Bolt Prices.

For example, The Omega Peacemaker weighs in at a wallet-busting 500,000 bolts.

Fortunately, you’ll have a tool that’ll help you hoover up all the bolts you need in no time…

Once you start Challenge Mode in Ratchet and Clank: Rift Apart, you’ll immediately notice that you have a bolt multiplier added to your HUD.

This bolt multiplier does exactly as its name suggests: It multiplies the number of bolts you pick up by a given multiplication number.

You need to kill roughly 100 enemies to reach the maximum bolt multiplier of 20. For every 5 enemies killed your multiplier will increase by 1.

At the maximum bolt multiplier of 20, you’re getting 20 bolds for every 1 bolt you pick up. So for example, if you pick up 50 bolts from a downed enemy, and your current multiplier is 20, you actually pick up 1000 bolts. Nice!

This should see you quickly building up the necessary funds to buy all the Omega weapons.

However, you can increase your bolt multiplier even further by using the +20% bolds armor suit.

This effectively increases the maximum bold multiplier from 20X to 24X. For example, instead of 50 bolds becoming 1000 bolts with a 20x multiplier, 50 bolts will become 1200 bolts with the 24x multiplier when suited in the +20% bolts armor.

With that number of bolts being sucked in, you’ll be buying all those Omega Weapons in no time!

You’ll need lots of Raritanium to upgrade the Omega weapons. Foruntnatly, there are lots of sneaky ways to grind near-infinite amounts of Raritanim in Rift Apart.

The first shows an easy way to get Raritanium, but it takes longer to build up a large amount of it.

The second video shows you a way to build up large amounts of Raritanium quickly but it’s a little bit harder.

Take a look at both videos and pick the method that best suits you.

Can you use cheats in Challenge Mode Ratchet and Clank?

One of the main problems I found while playing through Rift Apart was I was always running out of ammo.

I know, when it comes to game design, ammo is treated as a resource that the player must manage while facing the hordes.

But, in a game like Ratchet and Clank, sometimes you just want to blow stuff up without having to worry about running out of grenades or blaster bolts! Plus the enemies in Challenge Mode are hard enough as it is.

Fortunately, you can collect Gold Bolts to unlock an infinite ammo perk!

But there’s a catch: You’ll need to hunt down 24 of the 25 Gold Bolts in Rift Apart to unlock the perk.

Take a look at the YouTube video below to find out where to find all the gold bolts in the game so you too can turn on infinite ammo!

Having played games since the golden age of the Commodore 64, Nick finally took the plunge and studied Creative Game Design in university. After 3 years of "Study", Nick co-founded a games company where he soon discovered his true calling: writing about games. 11 years later Nick writes about a tower of topics, but gaming is always stacked neatly at the top.

link to How To Change The Background On A PS5

Being a diehard Assassin’s Creed fan, I wanted to change the background screen on my PS5 dashboard to an Eivor (from AC: Valhalla) 4K wallpaper. After searching for the option to change the...

Continue Reading
link to Why Is My PSN Account Locked?

I’d just got my hands on the new beast - The PS5 - and like so many of you probably did, I went to sign into my PSN account the same day.  Only, to my horror, I couldn’t sign...

We know that gaming can be much more than just a hobby. We want to help you transform your gaming from a fun pastime into your main money maker. Join us on this journey so you too can be a Career Gamer.

This site is owned and operated by NPS Publishing (NPSP). NPSP is a participant in the Amazon Services LLC Associates Program, an affiliate advertising program designed to provide a means for sites to earn advertising fees by advertising and linking to Amazon.com. NPSP also participates in affiliate programs with other sites. NPSP is compensated for referring traffic and business to these companies.